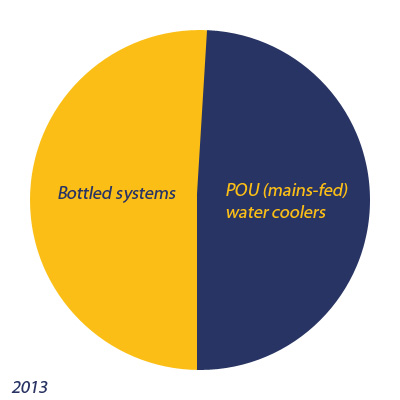 The BWCA (British Water Cooler Association) is an important and valuable body. And we rarely have an issue with its opinions. Just occasionally, though, we can’t quite see eye-to-eye with it. Take for example, it’s recent forecasts for the UK water cooler market. This started growing in earnest around the end of the 1980s and, since then has (according to the BWCA) grown to about 700,000 water coolers, to become the largest market in Europe. It’s a market that consists of both bottled water coolers and Point of Use (POU) coolers which are plumbed in and dispense filtered chilled mains tap water. According to the latest statistics (2013), POU (mains-fed) water coolers now account for approximately 50% of the market, as users become aware of their advantages over bottled systems.

So far, no problem. These figures sound about right to us. But the BWCA go on to claim that the migration from bottled to POU coolers has all but ceased, and that over the next four years, there is likely to be little or no change in the product mix between bottled and POU coolers. Here, we can’t help but feel that this projection is off the mark. Of course, we don’t have a crystal ball, and we can only express an opinion based on our experience, but that experience tells a rather different story. Over the past few years, we have seen a steady rise in the interest in POU water coolers, largely because of the massive cost and ease-of-use benefits they offer over bottled systems. And that increase in interest shows no sign of abating. In fact, in some sectors, such as retail, there has been a particularly significant rise in interest in POU systems – a change probably driven by the need to minimise costs to increase competitiveness. Other types of business, such as hair & beauty salons, prefer mains-fed water coolers because they’re highly space-efficient compared with bottled systems (as there’s no need to store bottles). But there are other sectors, too, where plumbed-in systems are gaining a real foothold. Even the domestic segment of the market, traditionally a small fraction of the total market (around 1%, according to Zenith International) is showing signs of growth. This is probably because coolers offer health and taste benefits over plain tap water, and bottled systems are too bulky (and expensive) for the typical home. So, just for once, we’re at odds with the BWCA – we’d say that the POU segment of the water cooler market isn’t just alive and well, but will continue to increase its share for the foreseeable future.

Of course, we’re not looking at the world through rose-tinted glasses. We fully recognise that customers are – rightly – extremely sensitive to price and service levels, and that companies such as ours need to get these right if the POU market is to continue gaining share. But we firmly believe that the fundamental advantages of mains-fed water dispensing systems over bottled systems are great enough to give us the opportunity to establish our technology as the dominant product type in the cooler market. And it is an opportunity we are determined to grasp.